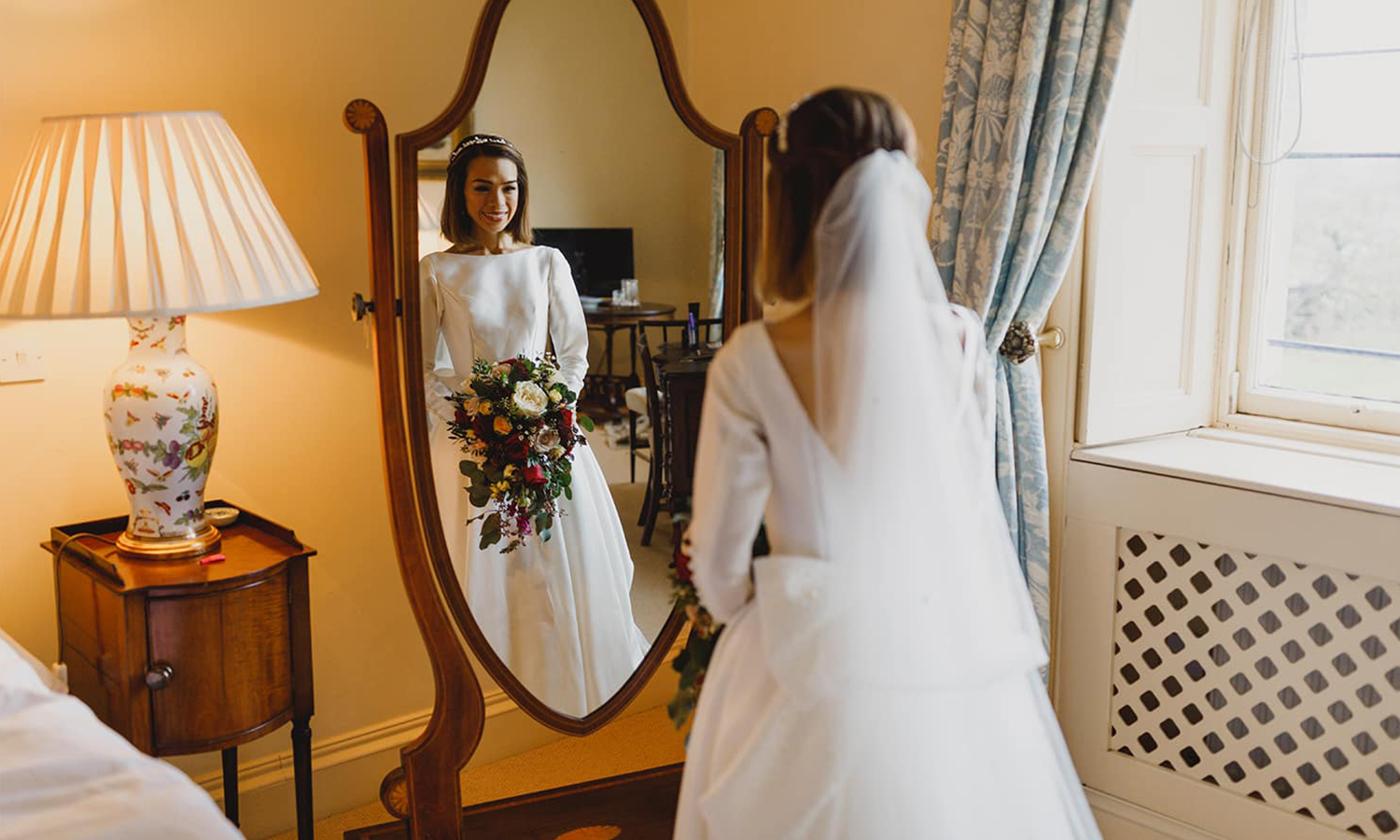 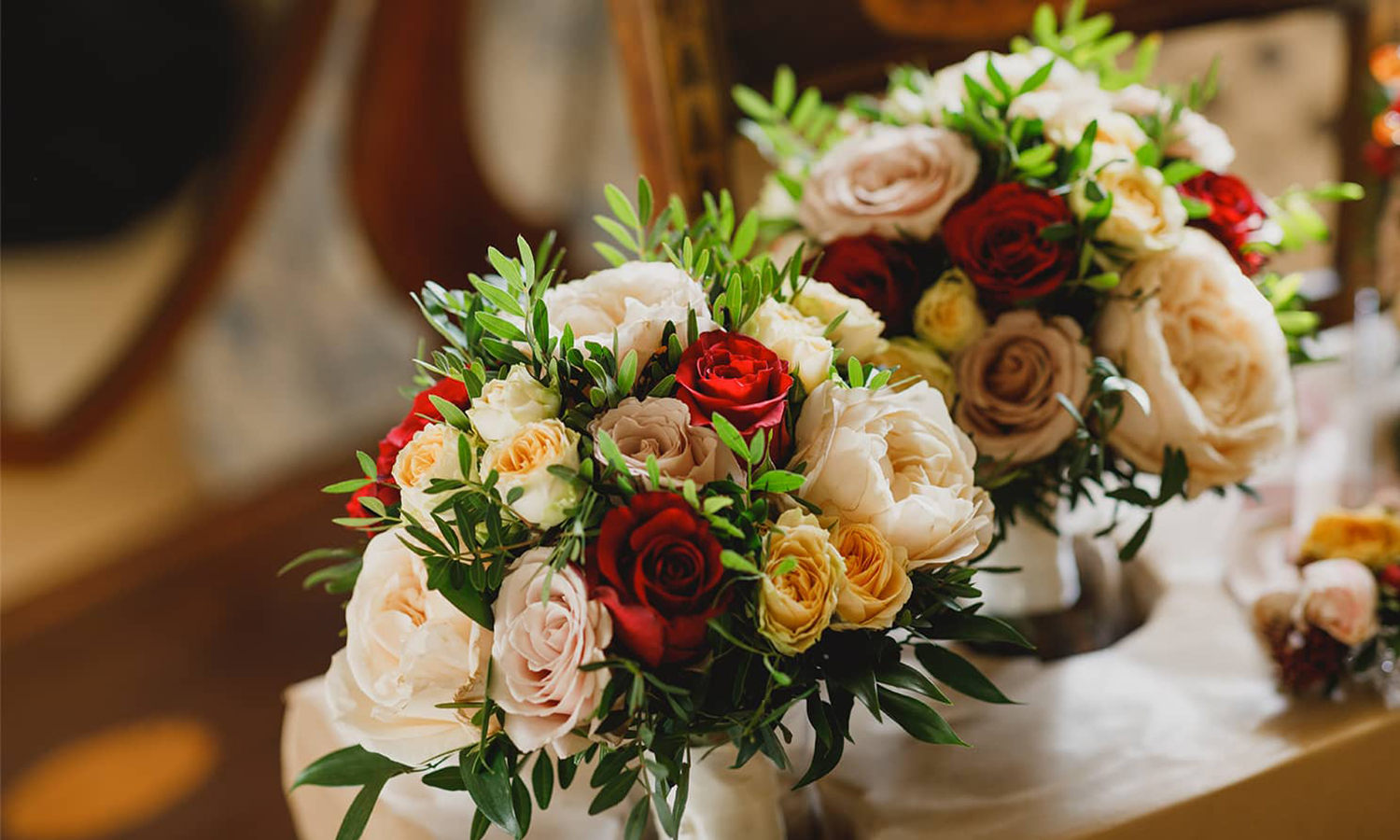 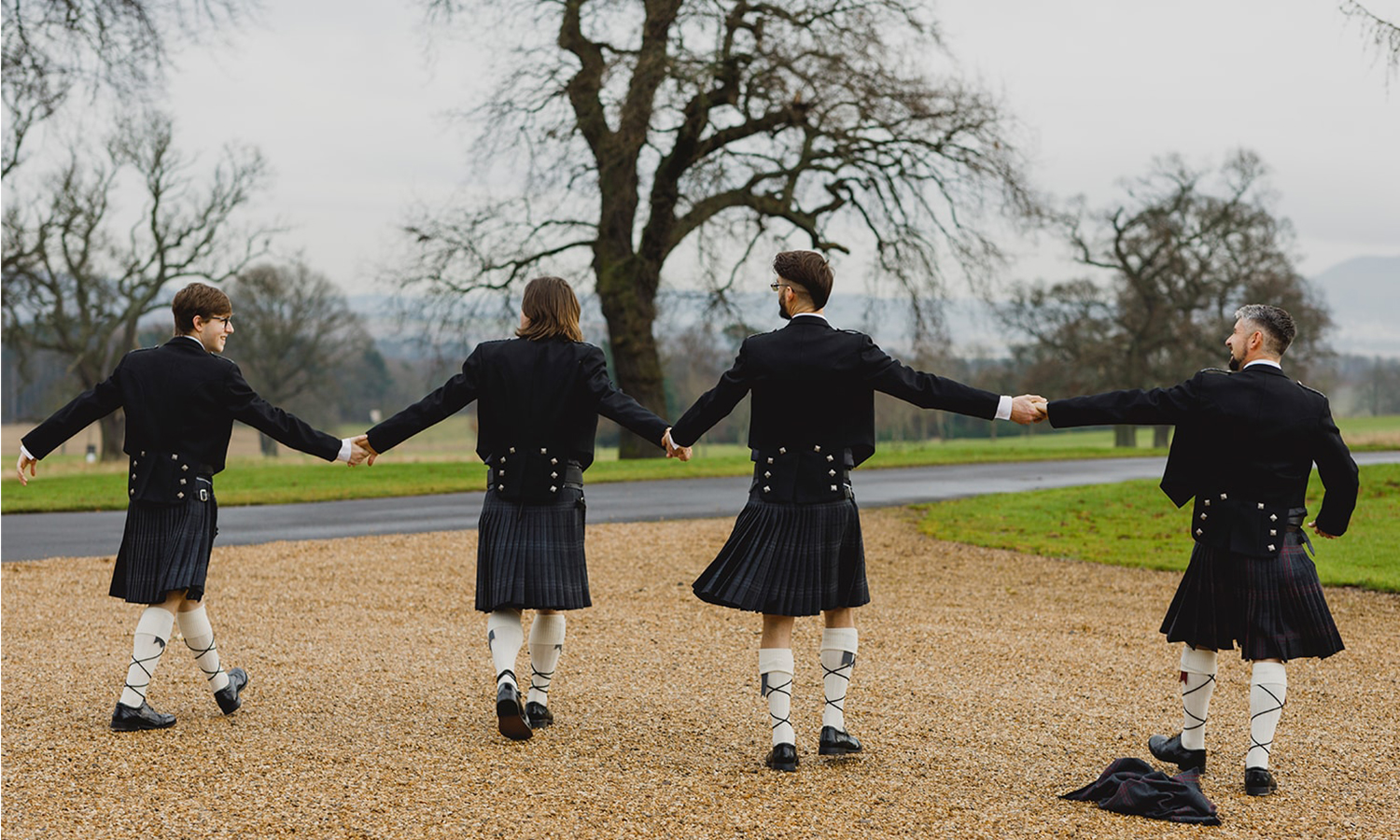 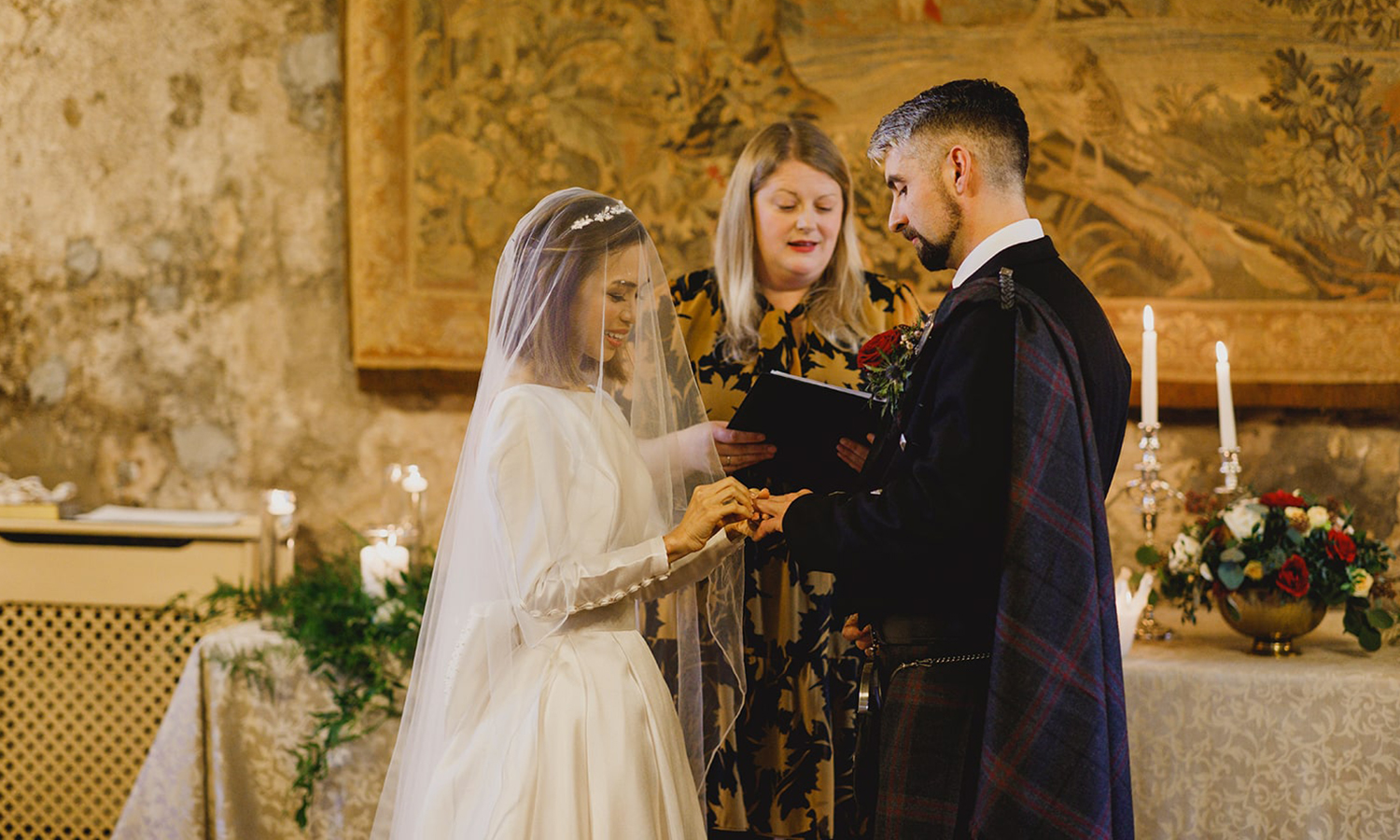 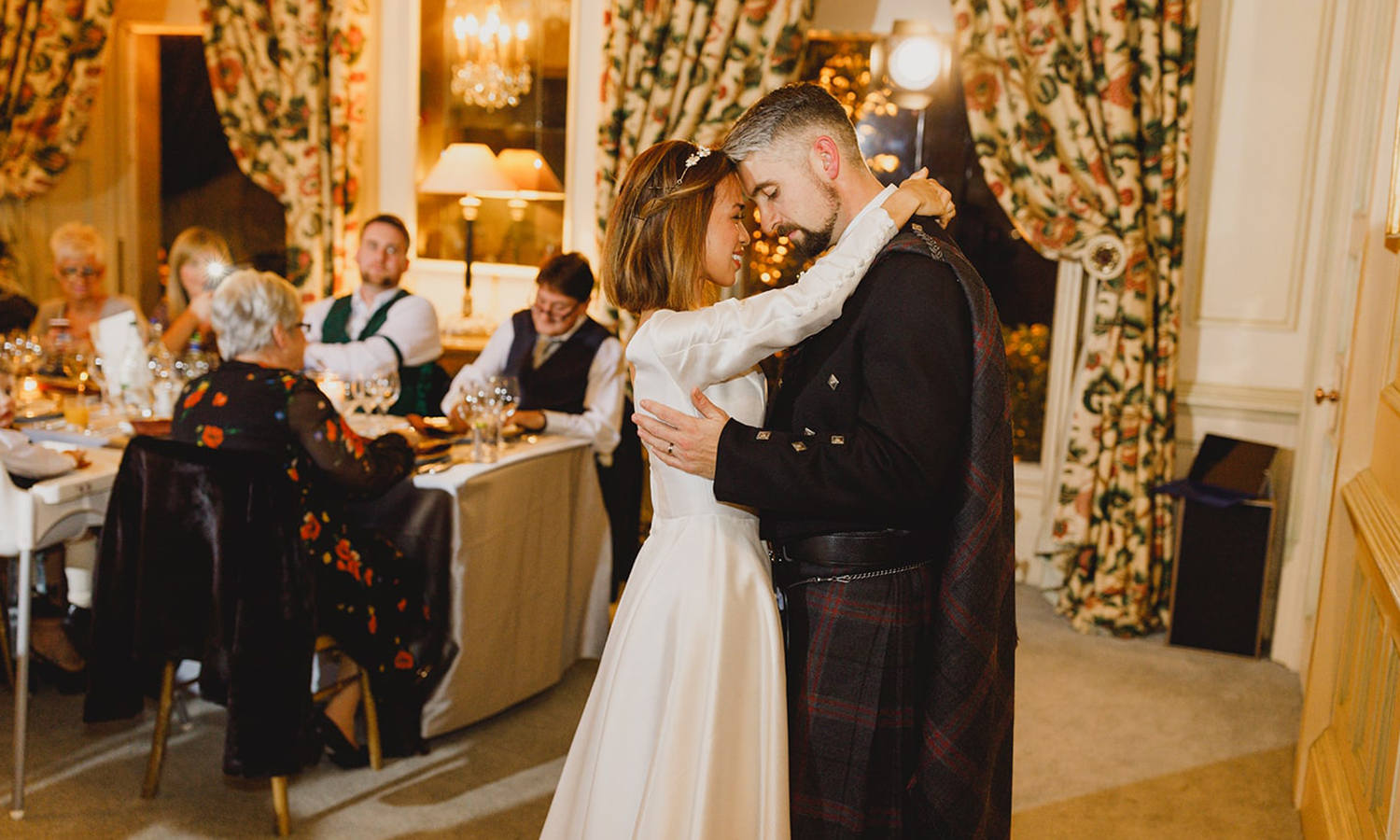 It was Nicole and Liam’s shared love of travel that first brought them together so it was no surprise when this Welshman and his bride from the Philippines decided to have a destination wedding.

The only question was where and after narrowing down their search from four European countries to three castles or manor houses, they fell for Dundas Castle, on the outskirts of Edinburgh.

Read on to find out how they planned their beautiful wedding with gorgeous images courtesy of Duke Wedding Photography.

“Liam claims that [we first met] when he saved me from a shark on the beaches of Bohol, Philippines!” smiles bride Nicole.

“But the truth is, that as most long-distance relationships start, we met online.”

Nicole had spied an Instagram pic of Liam carrying a backpack with country flags sewn on it and messaged to tell him about her similar cap with flags.

The two got talking and Liam eventually offered to help Nicole plan the UK leg of her upcoming European trip.

Then after dating for some time Liam proposed to Nicole back home in the Philippines just before they embarked on a month-long backpacking trip around Asia.

When it came to starting to plan their wedding finding the perfect venue, and even country, was the first priority.

“It had to be a destination wedding for both parties – not in the Philippines or Wales; it had to be both accommodation and wedding location in one, exclusively for us and it had to have the right ambiance,” says Nicole.

After looking in England, France, Portugal and Scotland they narrowed it down to three venues and in the end nowhere compared to Dundas Castle.

“It’s an absolutely gorgeous home, the layout was perfect for how the ceremony, wedding breakfast and party worked out and it had room for a dance floor – the only thing Liam requested,” says the bride.

“Also Liam and I always joked that we would elope to Scotland, and in a way we did!”

The couple were actually scheduled to marry in 2020 but owing to Philippine culture, they narrowly avoided having any date that year scuppered by the pandemic.

“My only sister had decided years ago that her dream wedding date would be 10/10/2020,” says Nicole.

“Part of Philippine culture is the belief that sisters should not get married in the same year because it would cause some sort of sibling rivalry; so out of love for my sister, Liam and I had to choose between the end of 2019, or early 2021.

“By God’s grace, He redirected our planning because being from opposite ends of the world, we would probably not have been able to get married at all if we had stuck with 2020.”

Getting married at the start of December Nicole and Liam decided on a gold, burgundy and navy colour scheme which would perfectly complement the castle’s décor.

They opted for a small and intimate guestlist and designed their own e-vites as well as researching games their guests couple participate in during their stay.

Finding her dream dress was a matter of only a few clicks for Nicole.

“I knew I definitely wanted a simple dress, not too many embellishments because I wanted it to be all about the drape and shape of the dress,” she says.

“I wanted a dress of heavier fabric and with long sleeves to be able to survive the Scottish winter!”

She googled “wedding dress long sleeves winter” and within a matter of links found a photo of a woman standing in a corridor that reminded her of photos of Dundas.

Knowing she’d found The One she had a couturier in the Philippines tailor-make it with a detachable skirt and a giant bow.

For her something old Nicole included a brooch from Liam’s mum in her bouquet, she added a new beaded headband and then borrowed her mum’s pearl earrings.

But when it came to her something blue the bride wore Keds sneakers with blue ribbon laces.

“So my husband wore the fancy shoes, I wore the sneakers,” she laughs.

One of the perks of having a destination wedding was having their guests stay over the night before.

Nicole and Liam treated them to a whisky tasting and a hearty meal with wine before the maid of honour surprised the bride with a hen party (“with even more whisky”).

“After all that alcohol I slept like a baby!” she smiles.

Then the morning of the wedding Nicole and her mum and maids had great fun getting ready with the stylists.

Walking down the aisle to I get to love you by Ruelle Nicole felt “all the love in the world”.

“Who wouldn’t when you’re in a magnificent castle, wearing a beautiful white gown, all eyes on you, everyone present had flown in from different parts of the world, just to celebrate this milestone with you and the love of your life who is waiting at the end of that aisle,” she says.

The bride was raised a Christian so they asked their friend Jasper from the Netherlands to give a religious message about how marriage is like a triangle with Christ at the top and husband and wife in the bottom corners.

The closer husband and wife get to the top the closer they get to each other as well.

“It was a beautiful message that Liam and I always go back to and keep in mind in our relationship,” says Nicole.

They also included Filipino traditions like lighting the unity candle and Jasper did a Christian version of a handfasting.

Then inspired by Hugh Grant’s vows in Did you hear about the Morgans? Nicole wrote her own rhyming wedding vows, even including “I promise to always cheer you on, to always have your back. To never stop admiring your biceps and your ass when you’re at the gym weights and squat rack”.

When it came to the evening reception Nicole’s best friend, who had flown in from the Philippines, took charge with a whole programme lined up to entertain during dinner.

He started off with songs and there were wedding-themed games and a make-your-own hot chocolate bar before a DJ from Reel Time Events taught them all to ceilidh.

Nicole’s sister’s maid of honour speech was a definite highlight as she chose to sing it to a backing medley of Disney movies.

“She managed to sing about my childhood, my previous relationships and my now-forever one,” remembers the bride.

“She is admittedly not the best singer and she is actually very, very shy about singing in public but she did it for me, and it means the world.”

When they started thinking about their wedding Nicole and Liam knew they wanted a close, intimate day.

“Filipino weddings tend to have guests by the hundreds and the event ends up becoming one big production,” she says.

“We didn’t want that. We wanted to be able to laugh and have fun with our friends and families, look back at times like the best man dropping the rings, and not see it as bloopers, but as something that adds character to the day.

“My heart was so full at the end of that night.”

And Nicole says being married they have learned that love is a decision that they make every day.

“More than all the romantic moments it’s about being able to serve another person,” she says.

“To be able to give everything I possibly can to another.”

These photos were taken and supplied by Duke Wedding Photography

“I loved the lighting conditions for a December wedding, the overall tone for the getting ready and softness of light during the portraits was really beautiful. Lighting the candles during the ceremony is such a sweet moment and I think this works so well in the setting of the Auld Keep. You also have to love the Welsh accents, the speeches involved talented singing voices from both Nikki and Liam’s friends and families.”
Robbie
Duke Wedding Photography 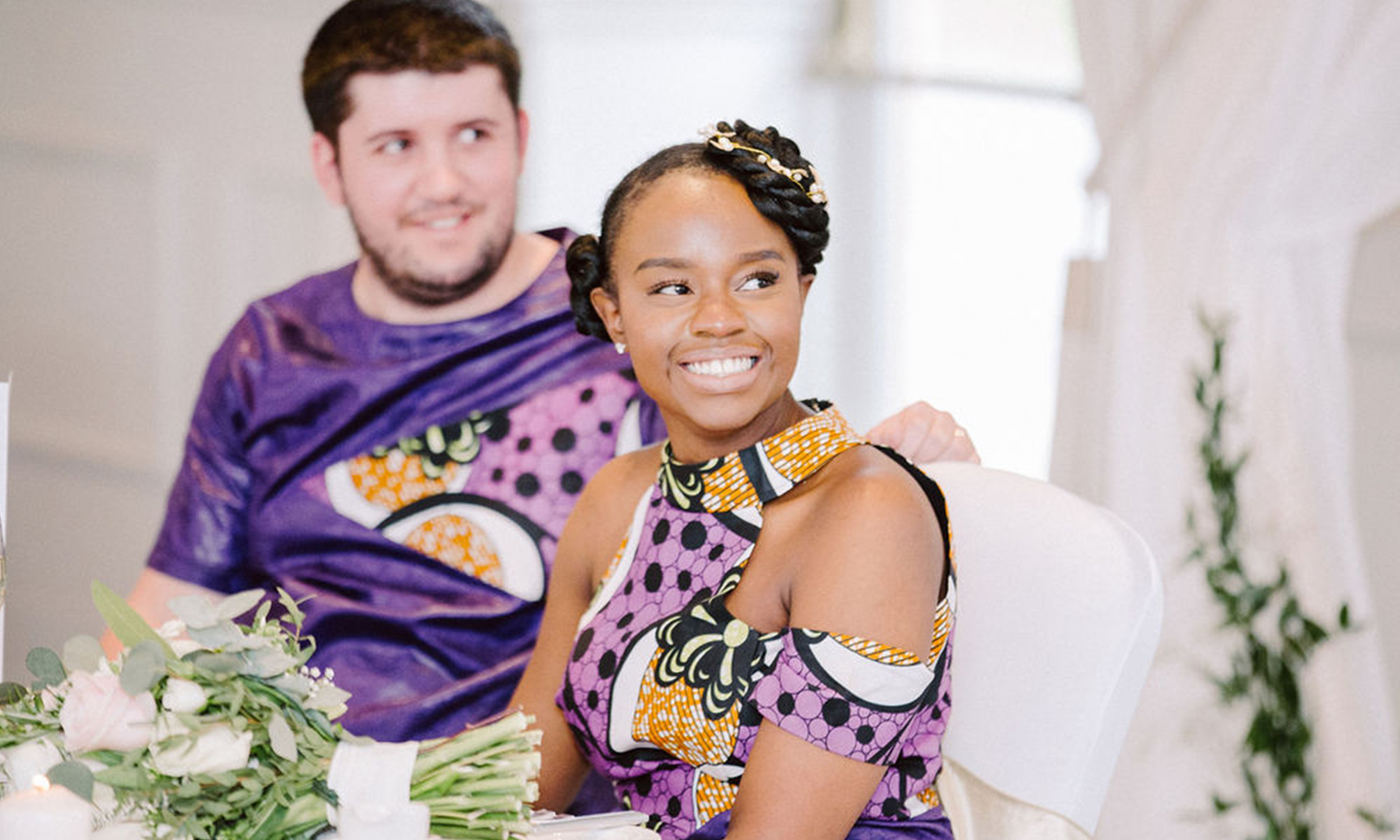 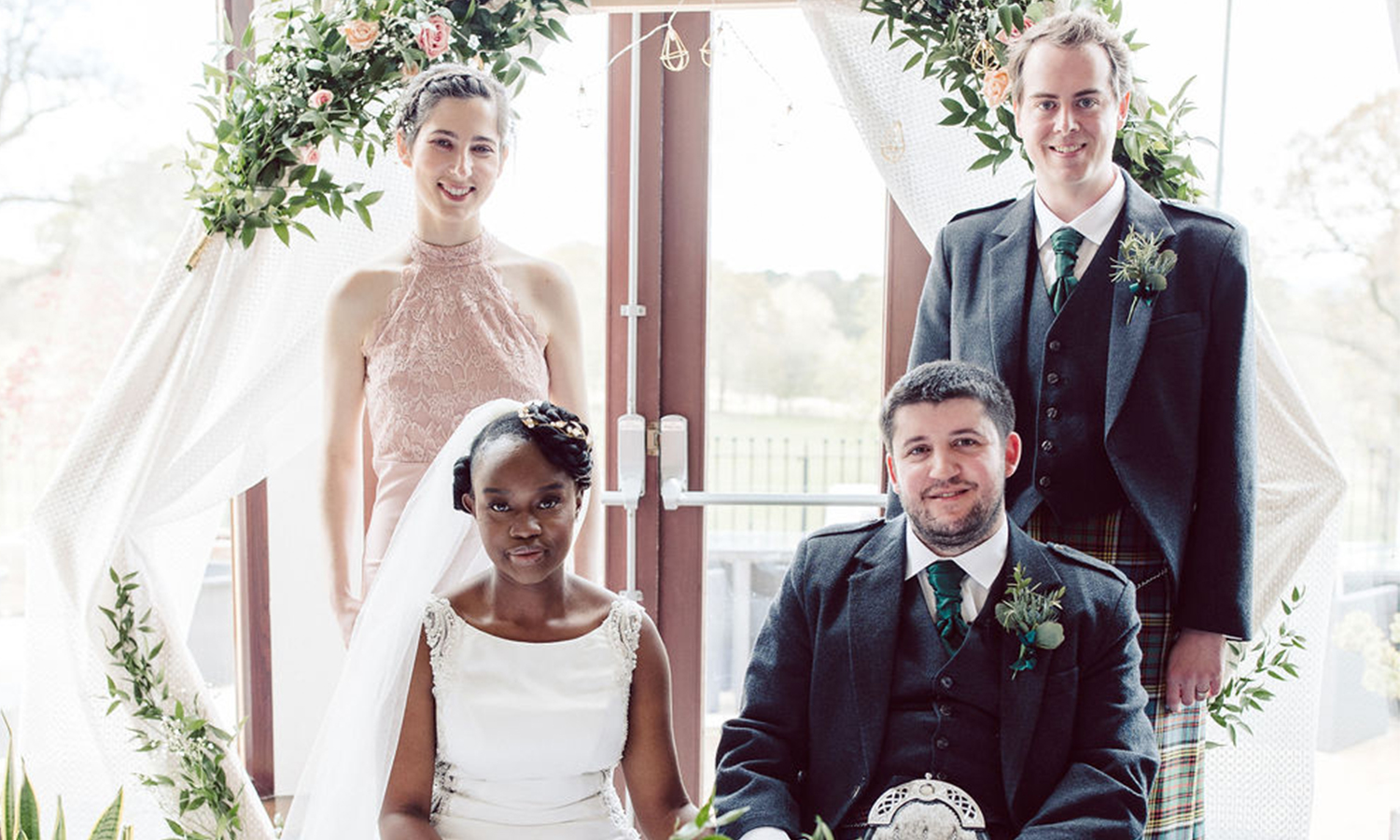 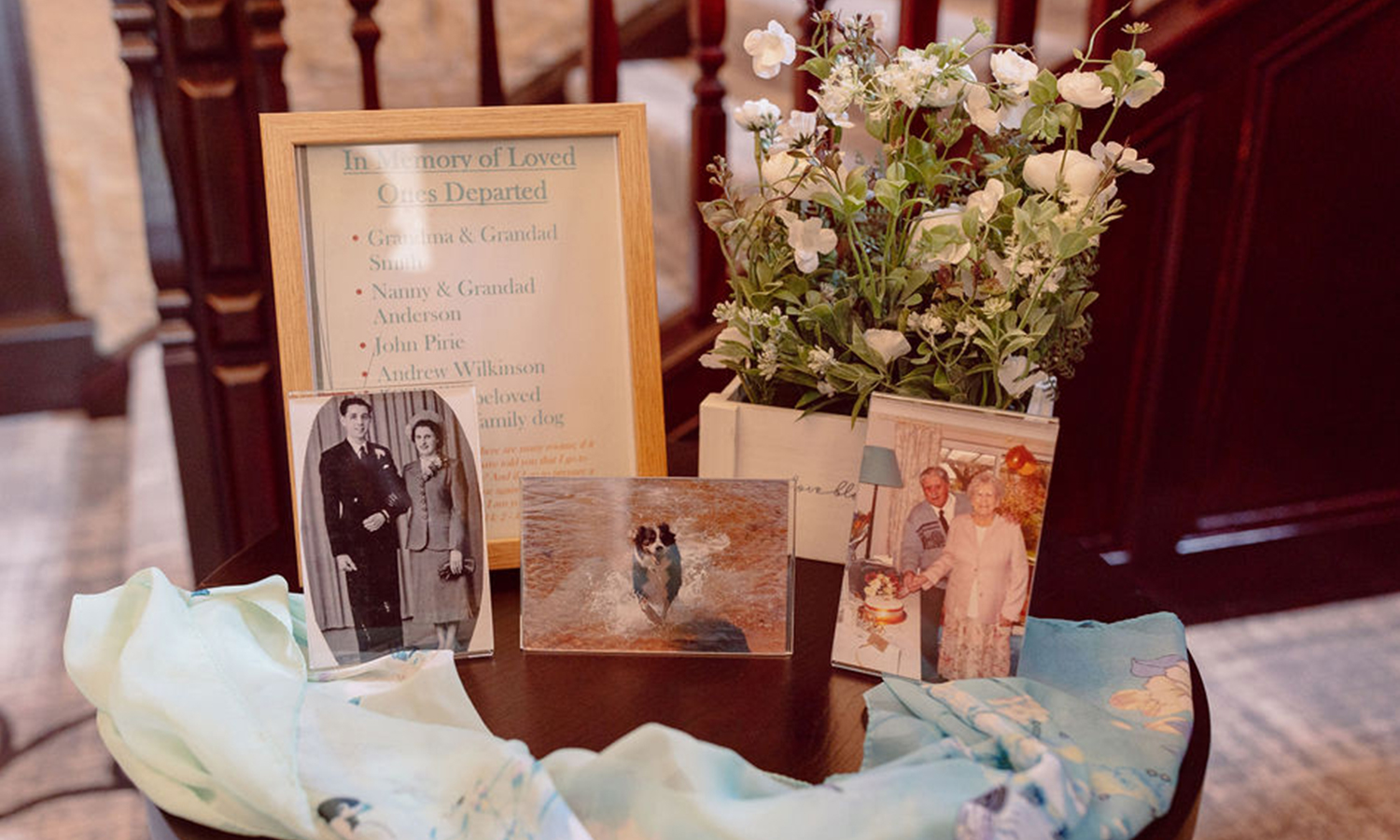 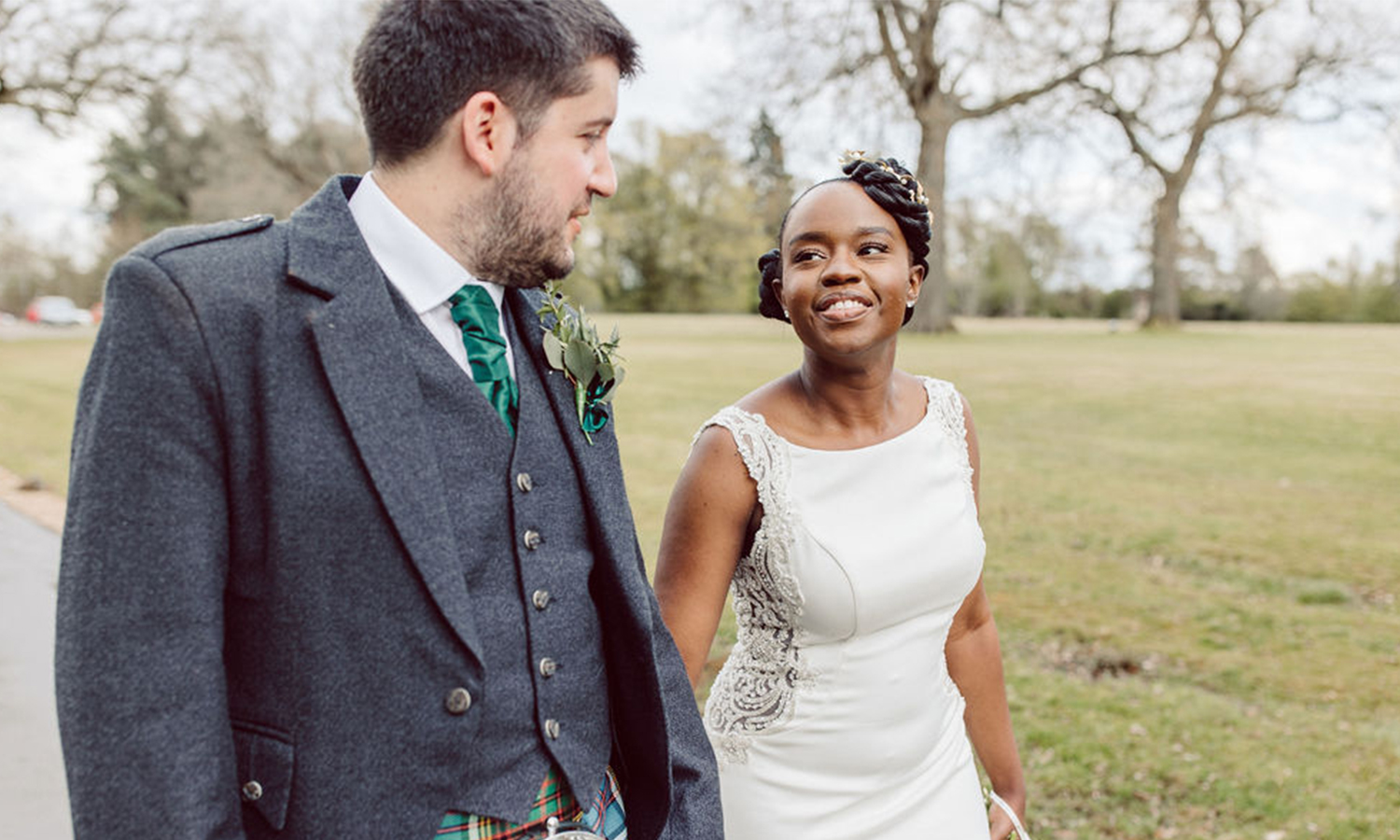 Nicole and Liam “eloped” to Scotland for their magical wedding with a classy gold, burgundy and 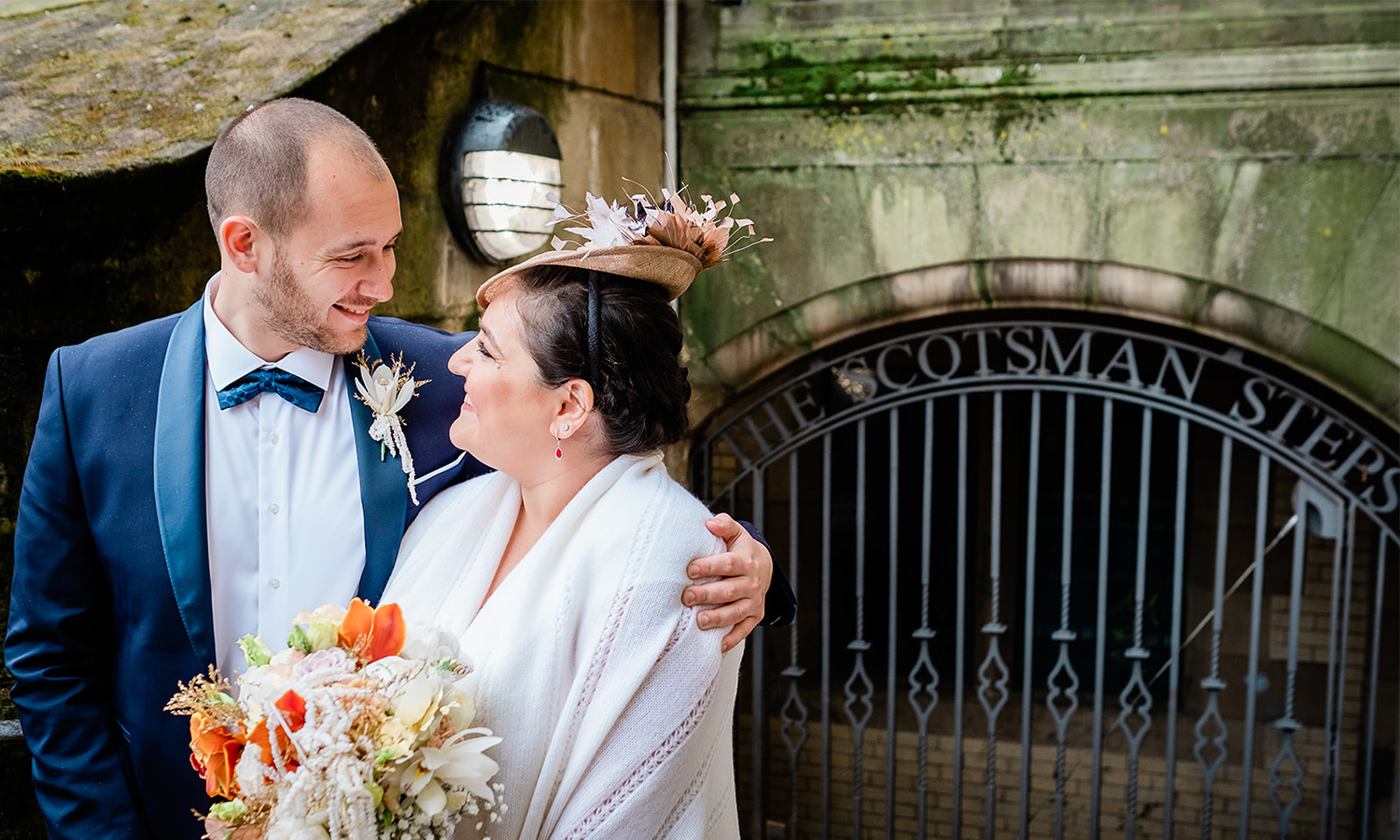 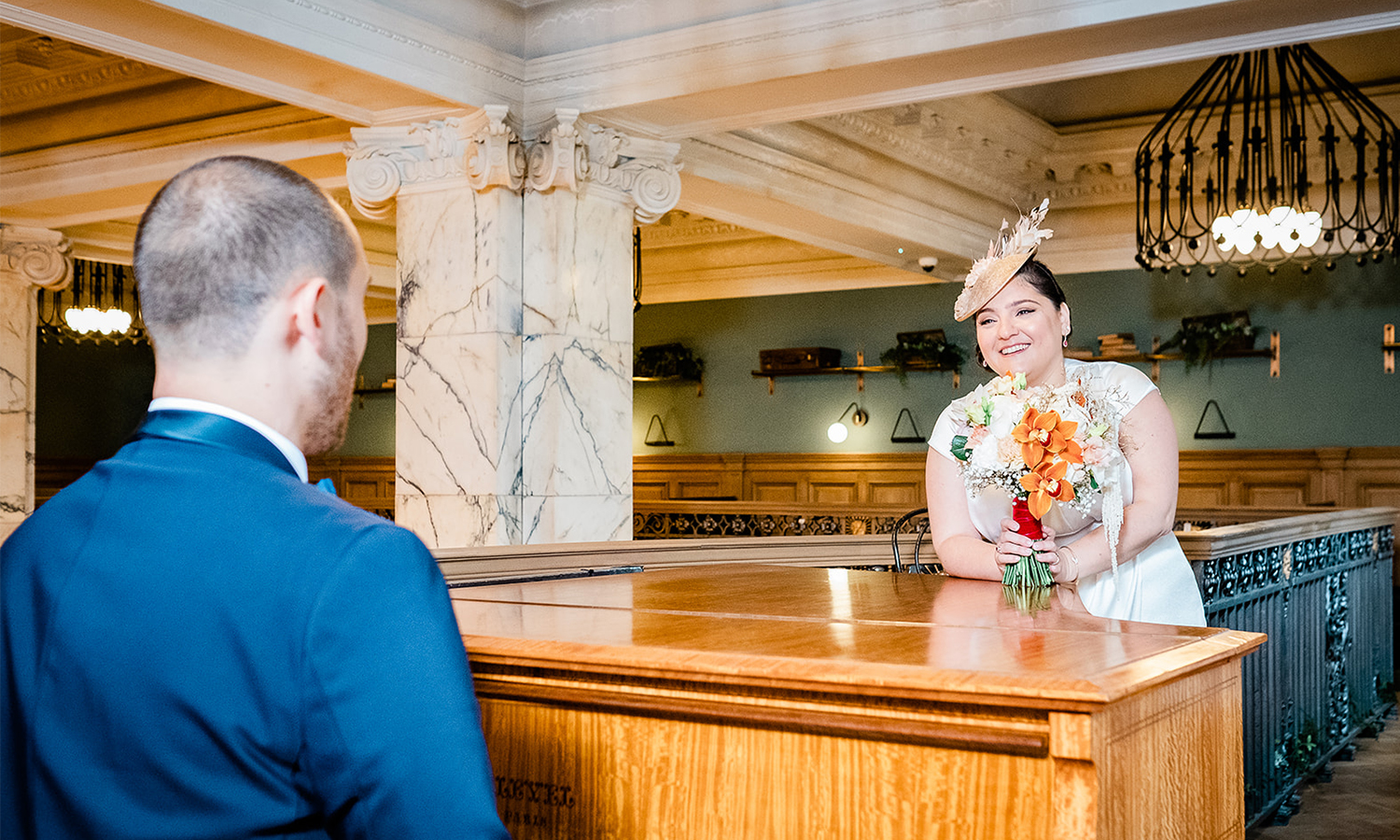 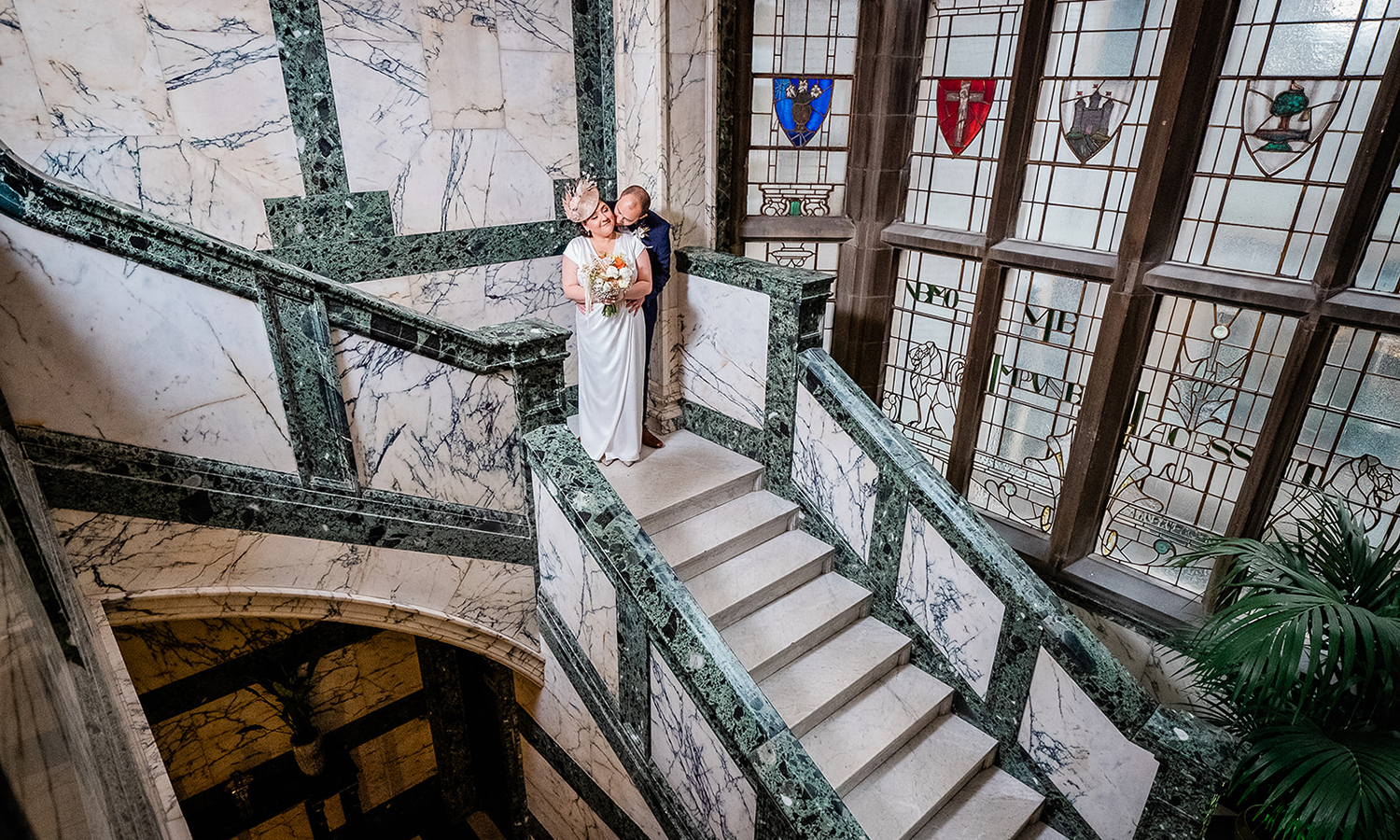 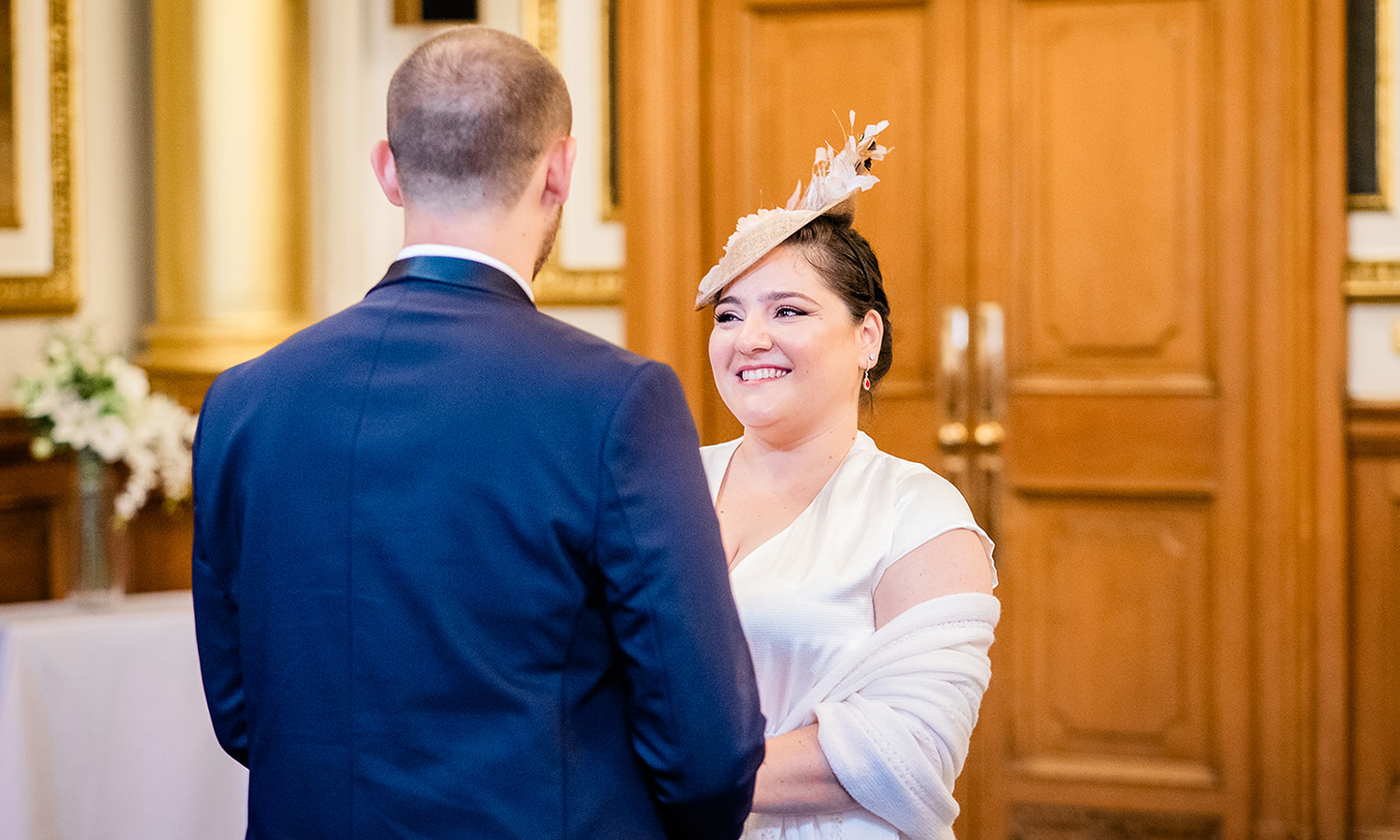 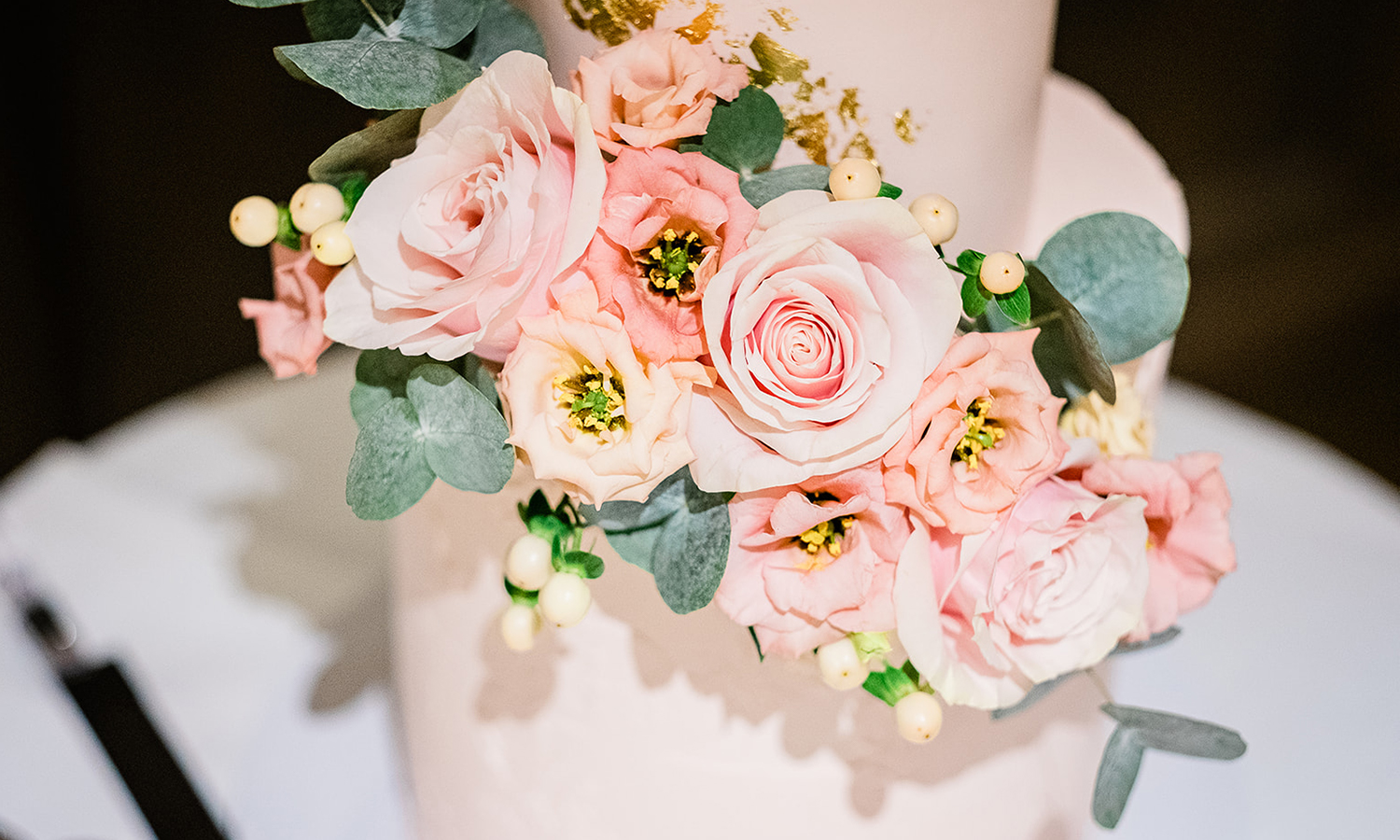 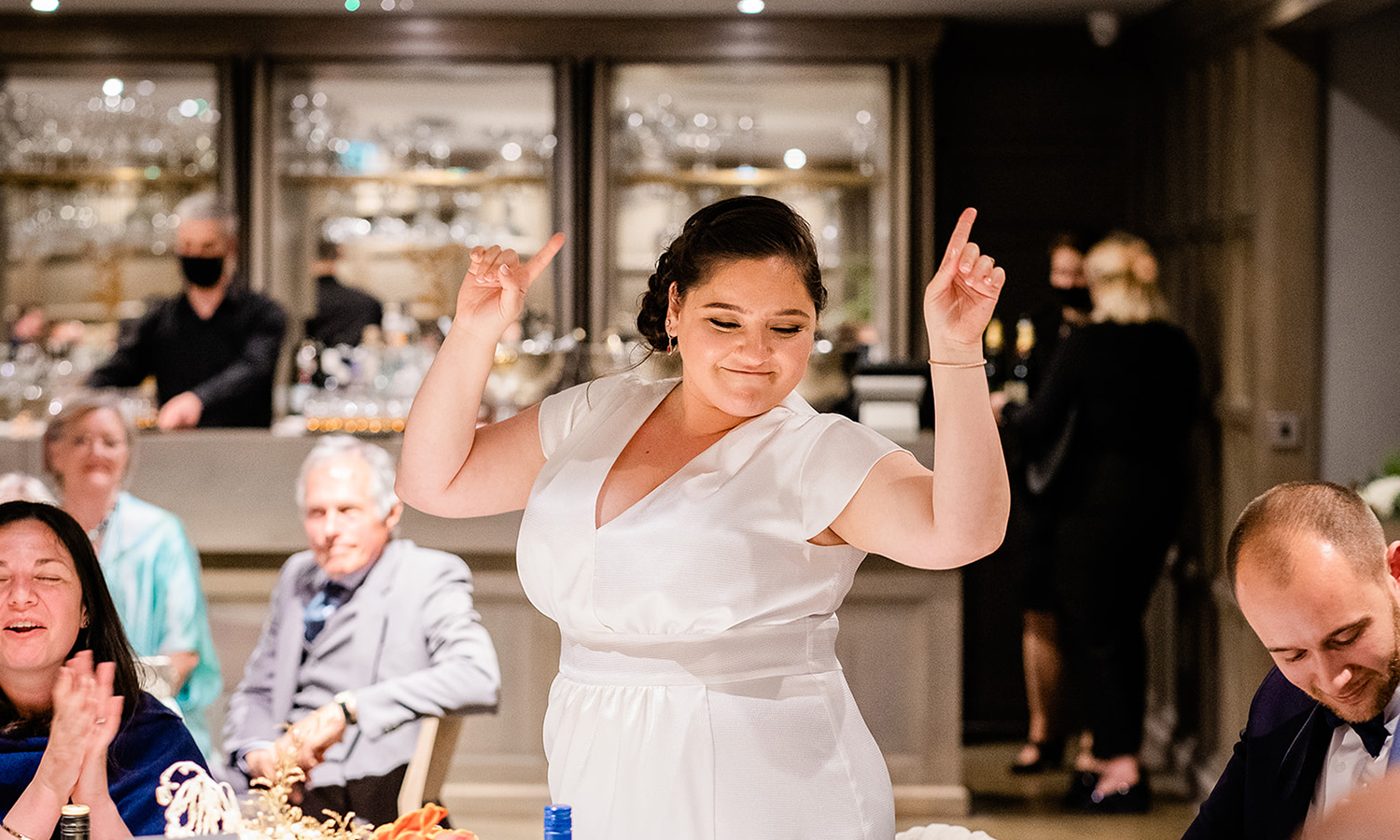